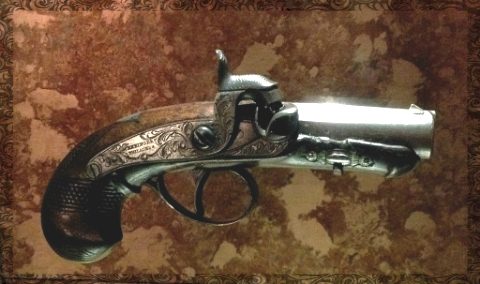 Whether you love guns or hate them, I’m about to disappoint you. Guns are my assigned topic this week, but I can’t take a righteous stand for or against.

To the best of my recollection, I’ve held a gun twice. The first was a rifle for target practice somewhere in the woods of Pennsylvania. The second was a .357 Magnum I wore as part of a Halloween costume at a disco nightclub in south Texas. You read correctly. It was a long time ago, but it was bizarre even then.

I’ve never owned a gun or wanted to, and the never wanted to part is what prevents me from taking a stand. To explain, here is a passage from another recent post:

… if you’re looking around for sins to preach against, and the one you pick isn’t one you personally grapple with, then you are cheating. That’s just a clever way of not addressing your own moral failings. There’s a word for that, and it’s not Christian, it’s hypocrite.

In other words, I have plenty of sins, from cookies to carbon footprint to crankiness, but I’ve never been attached to guns, so I won’t claim unearned moral high ground to say you shouldn’t be either. I hope you’ll pay it forward.

Back to guns: According to the UN Office on Drugs and Crime, the 2013 global average homicide rate was 6.2 per 100,000 population, and 41 percent of those homicides were committed with firearms. In the United States, more homicides were committed with firearms – 60 percent – but the overall homicide rate was slightly below average at 4.7 per 100,000. Our suicide rate – at 12.1 per 100,000 – is just above the global average of 11.4. As with homicides, firearm is the most common method of suicide in the United States. (In most countries it’s hanging).

So yes, Americans kill more with guns. But that doesn’t mean we kill more in total. Do we kill too much? Of course. Those are not numbers to be proud of. But it’s more complicated than too many guns, and hating people because of their feelings for or against guns won’t solve anything.

Buddha said, “Hatreds never cease through hatred in this world; through love alone they cease.”

Consider, though, that unless you’re going hunting, strapping on a gun before you leave home would seem to require a certain mindset: not necessarily malicious intent, but on some level, you must be thinking there are enemies out there, and you may run into trouble and need to shoot someone.

Jesus discouraged that: “This is my commandment, that you love one another as I have loved you. No one has greater love than this, to lay down one’s life for one’s friends.” Between that statement, the episode in which Jesus told Peter to put away his sword, and the recollection that the only weapon he carried was the cross he died on, it sounds like Jesus would encourage us to take a bullet rather than fire one.