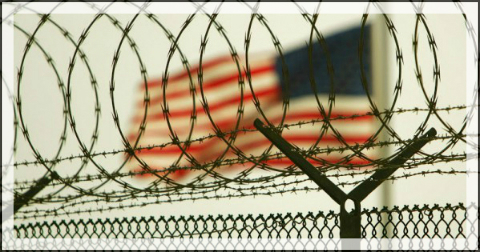 If everyone currently housed in U.S. jails and prisons were incarcerated together in a single facility, it would tie Houston as the fourth largest city in the country. The United States currently incarcerates at by far the highest rate in the world, and no small factor in this is the racism that permeates every aspect of our criminal justice system, from where police choose to patrol to how long a person spends in jail.

In fact, mass incarceration is at the heart of a “stunningly comprehensive and well-disguised system of racialized social control,” as Michelle Alexander convincingly demonstrates in The New Jim Crow: Mass Incarceration in the Age of Colorblindness. Here’s a brief look at how this plays out:

I recently had the privilege of talking with a young man in Cook County Jail on Chicago’s west side, and he mentioned that his father had been in the penitentiary most of the young man’s life. My mind went to my brother, who took over the family business when my father retired. The parallel is unavoidable. Following in a parent’s footsteps is a natural path for any child, and it’s as natural and even expected for this young man to be in prison as it was for my brother to take over the family business. This is the inherited incarceration discussed in the video above.

If you’re inclined to say people shouldn’t break the law, and everyone just needs to work hard for success, you were most likely born into circumstances like my brother’s. But the reality for many is reflected in these words from an inmate at Sing Sing: “Almost all of us in this prison are from about four or five neighborhoods in New York City. It’s like a train that begins in your neighborhood. You get on when you are 9 or 10 years old, and the train ends up here.”

If such a train didn’t run through your neighborhood, then instead of congratulating yourself on an accident of birth you cannot take credit for, you should count your blessings and get to work on change.

The 1947 film Gentleman’s Agreement, which addresses anti-Semitism, reminds us that it’s not the noisy and nasty who allow racism and prejudice to perpetuate, it’s the quiet and polite people who awkwardly look the other way and passively hope for change:

The most effective racism isn’t shouting slurs and refusing service. It’s blithely carrying on while a system like our mass incarceration ruins lives. As Hannah Arendt said, “The sad truth is that most evil is done by people who never make up their minds to be good or evil.”

As Kathy learned in the film clip, if you don’t work to change a racist system, you effectively collaborate in maintaining it. Racism is part of our country’s past. Don’t pretend it’s not a part of our present. And don’t let it be part of our future.